We were standing talking about how our babies were getting so big too fast, waiting to pick up our oldest kids. It was an innocent question.

But it was a loaded question.

Behind that question is was a concern. My older children were talking more at this age. Is there something wrong with my baby?

I never know how to answer this question.

My girls have always been talkers. My youngest son, I forget he’s only three because he talks as well as his six-year-old sister. But our oldest son has been a different story.

He didn’t have words.

No one could understand him.

We sat on the floor in the kitchen in tears trying to communicate with each other.

Now we have answers.

But then, we didn’t. All we had were questions.

If you have found yourself with more questions than answers, this is for you.

Signs Your Child May Have a Speech Delay

How many words does your child have that everyone can understand? Speech delays are hard to determine when they are young. At the same time, early intervention is key. At eighteen months old our son had very few words, maybe 5. At age two he had maybe ten. Maybe. It wasn’t many. Even those words weren’t easy for others to understand. Most evaluations aren’t done until the child is two years old. Our son gave me the best birthday present ever when he said “Mommy” on his 2nd Birthday.

2. Gesturing Instead of Using Words

Instead of trying to use their words, they take you by the hand and point to what they want. Gesturing instead of talking is a possible indication of a speech delay. I keenly remember this with our son. He would try to use his words but in frustration he would take us by the hand and pull us to where he wanted us to go, pointing to the object he wanted.

3. Tries to Make Sounds of Words and Letters but Gives Up Out of Frustration.

Motor planning is an integral part of speech. When our son was trying to tell me something, I could see his little mind working. He knew exactly what he wanted to tell me but he couldn’t get his tongue and mouth to coordinate with his brain. Speech therapy was so important in helping him figure out how to make everything work together.

This was our son. He would sometimes put two words together but rarely three. If he couldn’t get his point across in those two words, he would gesture to make up for it. 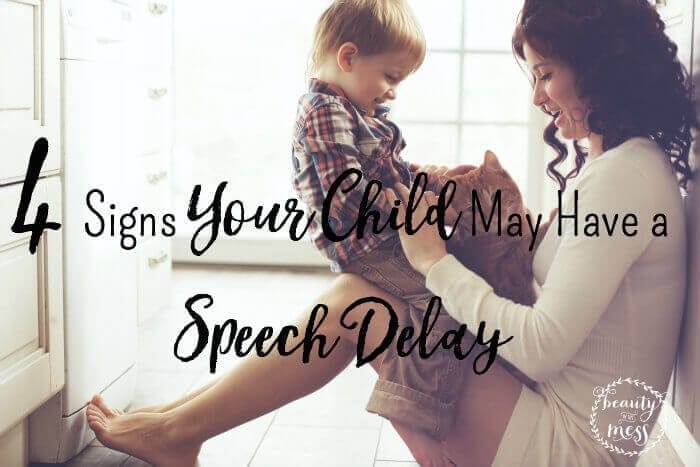 Just because your child may exhibit these signs does not mean they have a speech delay. Talk to your pediatrician. Our pediatrician was not concerned when I questioned her about a possible speech delay during the 18-month appointment because his older sister was a talker who talked for him, and he’s a boy. There was something in my gut that told me I needed to look into speech therapy.

Of course, there are also fun things you can do at home to promote language and speech. I’ll share those soon.

Let me just add this:

You did nothing wrong.

You are not a bad mom or dad.

We don’t know the cause of our son’s speech delay. Could it be gut-related? Yes. Could it be some other factor? Of course.

None of our other three children have a speech delay. Our 21-month-old tonight said, “I will hold Mommy’s hand.”

Every child is different.

It’s not your fault.

If you want to read more about our journey with Childhood Apraxia of Speech, you can read our story and check out some fun books you can read together that will help in speech at home. I also shared a letter I wrote to my son in hopes that others would read it and know that they aren’t alone.

What questions do you have about speech delays or specifically Apraxia?

I just want to say thank you for having these posts. I am glad I am not alone. My son also has childhood aparxia. I look forward to reading some of your book suggestions with him. Did you homeschool your son? If so, did you have any troubles because of the apraxia? I really want to homeschool

These are all great things to look for, My middle child had a slight delay. He was not far enough behind to have help but he was enough behind for me to work harder to help him. Come to find out his ears were messed up, so it is always good to be open minded that there may be other issues there.

YES! Sometimes it's as easy as having their ears cleaned out because earwax is blocking their ear canals.