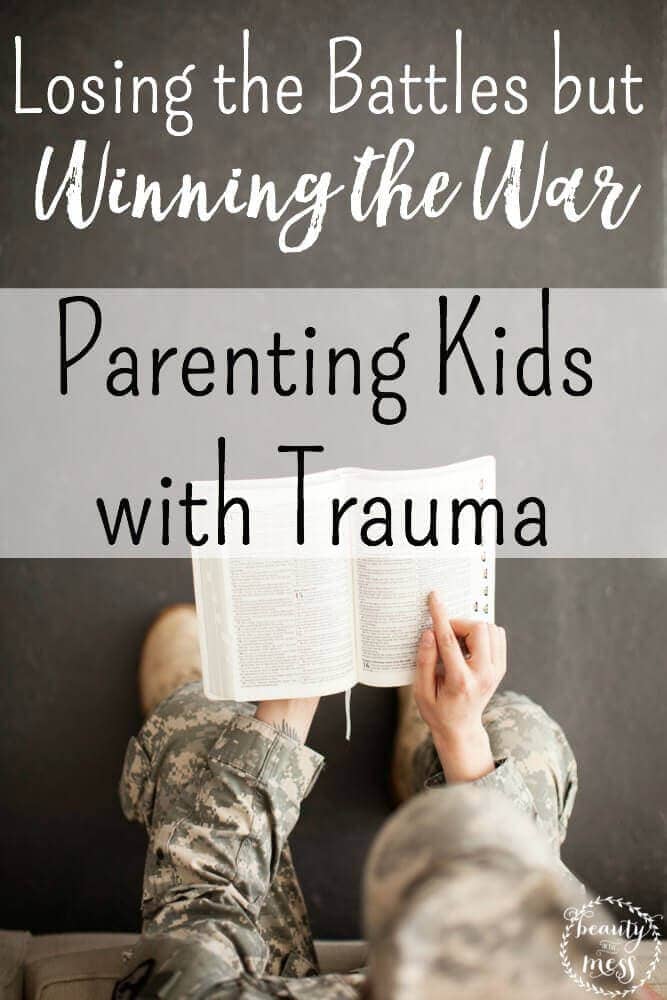 Parenting is hard. Add in special needs and parenting kids with trauma, and it can be overwhelming. But there is hope. The war has already been won.

I often see articles on social media with parents upset over adoptive families using terms like special needs, calling out that their kids have been adopted, and other similar concerns.

I don’t understand that.

In our world, our sons’ being adopted is a wonderful picture of the broken and restored, and failed people trying to love the way He, God loves us. And, our children’s needs are special.

Early childhood trauma wires their little brains differently. It’s not an insult, it’s just facts. And I sure wish I’d known someone early on who had fought the same battles we are and lived to tell about it.

Over and over again so I hope, that we can be living, breathing casualties of the parenting war on traumatized kids, but it ain’t always pretty. And even now, as I’ve been writing this post in my head and jotting notes for weeks, the loss feels huge and the win feels so far away. It was within grasp, we got a taste of victory- and boom. Not one but two sons now come at us with venom and anger.

Threats and words that cut deep; anyone who says words don’t hurt, lies.

If you’re parenting a special child the trauma might be from a different cause- abuse, neglect, or both; but the results and the behaviors are often the same.

The early years were tough. Two babies who didn’t sleep. We tried everything from sitting between their beds holding little hands for hours. Hours. And still, they would wake. Battle lost.

Sunday school and Awana leaders greeted us at pickup, not with a smile but with “I cannot allow (fill in the blank with anything from hitting, refusing to sit down or disrespect), you need to talk to him”

Battle lost. And can I just add, when our churches can’t or won’t understand our kids, where do we find the encouragement and support to keep fighting on?

But we didn’t stop fighting- we went searching for answers and help- found so far in play therapy and books. Sadly, I didn’t have a support group or know other moms who were fighting the same fight- it felt so lonely.

And then they started school. We had no idea with that first phone call that the battles would get fierce. The kindergarten teacher told me she’d “never had a child like him before in all her years of teaching” and what were we going to do to fix his behavior. Casualties- the count began.

The casualties could be found all around us- friends that stopped calling and inviting us over and family who didn’t know how or what to do when they melted down. Teachers who refused to see what we showed them. People in general who didn’t understand. In 2011, I wrote:

One of the biggest criticisms we face comes when we try to explain the psychological damage our boys are in the process of healing from. When we speak to teachers, friends, school and daycare workers to explain some of their behaviors, we get the obligatory smiles, the rolling eyes, and the sneers. They often assume we are just making excuses for them, after all, they were so young. If we would just discipline them a little more, we could solve all those “behavior” issues.

I could write pages and pages on the losses.

From kindergarten, we’ve been fighting and advocating for our youngest sons. Until this year, it was mostly Elijah- the trauma he wore on his face. You could read his mood like a bad mystery. No guesswork- on his face, and in the face of anybody that crossed him. But Isaiah’s trauma was there, he was just stuffing it down and he did a good job of stuffing it until there was nowhere left to hide it. So now, there are two.

And then, the greatest loss to date was making the decision to send our son to residential care.

We were losing hope.

It’s been just over a year since Elijah came home from Fresh Start. I wrote less during this time, because I was a bit unsure and afraid. Would the progress last?

“The LORD is my strength and my shield; my heart trusted in him, and I am helped: therefore my heart greatly rejoiceth; and with my song will I praise him.” Psalm 28:7

Since Elijah came home, we’ve had some good days, even weeks. But in the good we still have what seems like losses. We have, and will continue to need in-home support, TDT counselors at school, outpatient therapies, psychiatric care, respite weekends and more. As I write this, my youngest is suspended from school, I’m getting daily texts and calls about my older son, from the trained professionals asking us what to do-it feels like it never ends, and we never win.

It would be easy to lose sight of what we are battling for- what the outcome is to be. Sometimes, we lose sight of what is important and get bogged down with all the failures. It’s easy to forget the little boy with his skinny fists drawn or coming at you with his pogo stick- is the sweet, hurt soul that spends hours trying to get past his fears and needs your arms around him to fall asleep.

That’s how I’ll know the war has been won. SOL test scores and how many birthday party’s they are invited to, the tardies piled up because the mornings were difficult is a loss, but doesn’t matter in eternity. And the angry words they spew won’t matter in the end either. Being able to be a successful member of society, which will come if they love Jesus and love people, that is what matters.

So what do we do as weary parents who want to waive our white flag and quit surrender?

You’ll need to read and research and figure out what makes your own child tick- and then advocate for them. You’ll need to help their teachers, friends, daycare providers, Sunday School volunteers, grandparents, and cousins understand why you don’t just “discipline” it out of them.

You cannot fight alone. Thankfully, as Christians, our God fights for us, and alongside us. But you’ll need people with skin to hug you on the bad days, cry with joy for the good ones and pray for you on. Professional therapists, counselors, and advocates should also be part of your army.

Five days of being on the green at school may not be possible. Five days of no meltdowns may be too hard for them. So, if you get two or three days or two or three hours of success- praise them for it and remember it when things aren’t going so great.

When it’s easy and when you don’t like them, just keep loving them.

5. Remember what you’re fighting for

Teaching our kids to love Jesus, and love people will ultimately be what wins the war. And He is fighting for us.

“Have I not commanded you? Be strong and courageous! Do not tremble or be dismayed, for the LORD your God is with you wherever you go.” Joshua 1:9

Get your combat boots- you’re going to battle. But don’t fear- the war has been won.

Robin is a full-time Marketing professional, wife, Mom and Grammie. She had big dreams when she was little and it didn’t include working outside the home or adoption. But, when you love Jesus like Robin does, you obey when He leads you down a different path.

After eight years of infertility, Robin was able to experience pregnancy and gave birth to her oldest son, Shayne. Nearly ten years later, she and her husband of 29 years, Rex again obeyed when they fostered several children eventually adopting their youngest sons, Elijah and Isaiah in 2009. Through this process, God is teaching her how to love unconditionally and trust Him fully. You can read more about her blessings in the midst of the crazy at http://5allenz.blogspot.com.5allenzplus.com/

Thank you for posting this. My 6 yr old is not adopted or in care but she has been traumatized greatly by her father.

Some days feel like an endless battle and i wonder if things will ever get better.

Today has been a hard day and this post was just what I needed to read.

Thanks, we r in the process of fostering 3 siblings with trama, and wonder r we making a difference. On the really stressful days we remind our selves it’s only a season. God bless you and strengthen you .

As I was reading I felt that you'd been easedropping at my house. Trauma, neglect and abuse comes in all shapes and sizes and the effects it has on each child looks different. My daughters came home almost 7 years ago and I could have never imagined that parenting them would take so much research, doctors, therapy, sweat, tears, and mostly prayer. Thank you for sharing your story. It lets me know I'm not crazy or alone, and that I'm on the right track.

I am so glad you are trusting God. I would suggest, PLEAD with you, that you find a god BIBLICAL counselor. Not just a "Christian" counselor. For your sake and your children's sake. Look up ACBC Counselors in your area. Counselors within this association counsel strictly from Scripture, and it will make a word of difference.