Join my newsletter list to be the first to hear our latest news! Learn More
You are here: Home / Simple Disney / What You Should Know Before Attending H2O Glow Nights
This post contains affiliate links. Read my full disclosure.

H2O Glow Nights at Disney’s Typhoon Lagoon is like a kick-off to Summer Vacation for many. But for others, the water parks at Walt Disney World Resort are ignored. As a non-water parker goer, is H2O Glow Nights worth the hype?

Have you ever been to the water parks at Walt Disney World? I always thought they were a waste of time, but I couldn’t turn down an invitation to a Disney Parks Blog meet-up to kick off the first H2O Glow Night of the Summer.

Here’s my unbiased opinion, including six things we forgot so you don’t make the same mistake!

Is H2O Glow Nights Worth the Hype? Confessions of a Non-Water Park Goer 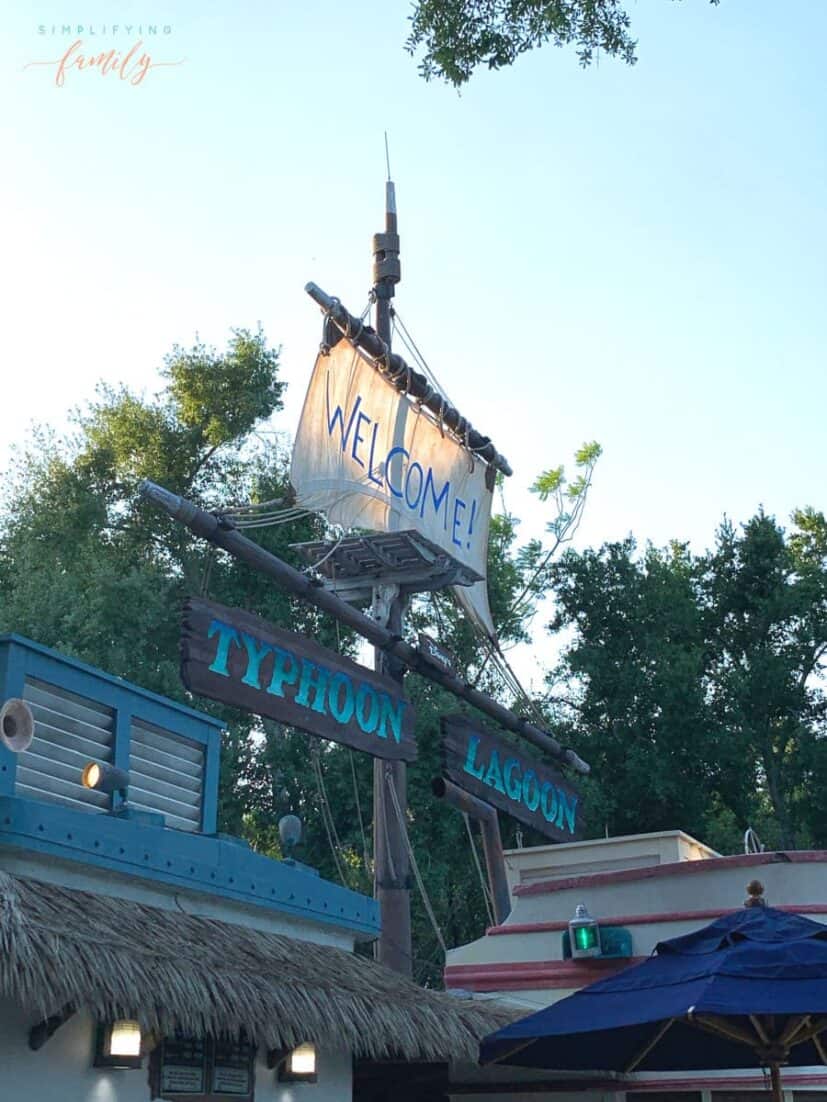 While I’ve lost count of the number of times I’ve been to Disney’s Magic Kingdom, Hollywood Studios, Epcot, and Disney’s Animal Kingdom, Disney Water Parks were never on my radar.

I knew they were there, but I had no desire to go to Disney’s Typhoon Lagoon or Disney’s Blizzard Beach.

But then Disney Parks Blog sent out an RSVP for a meet-up!

How could I say no to that?

It was going to be the perfect Mommy-Daughter date night! 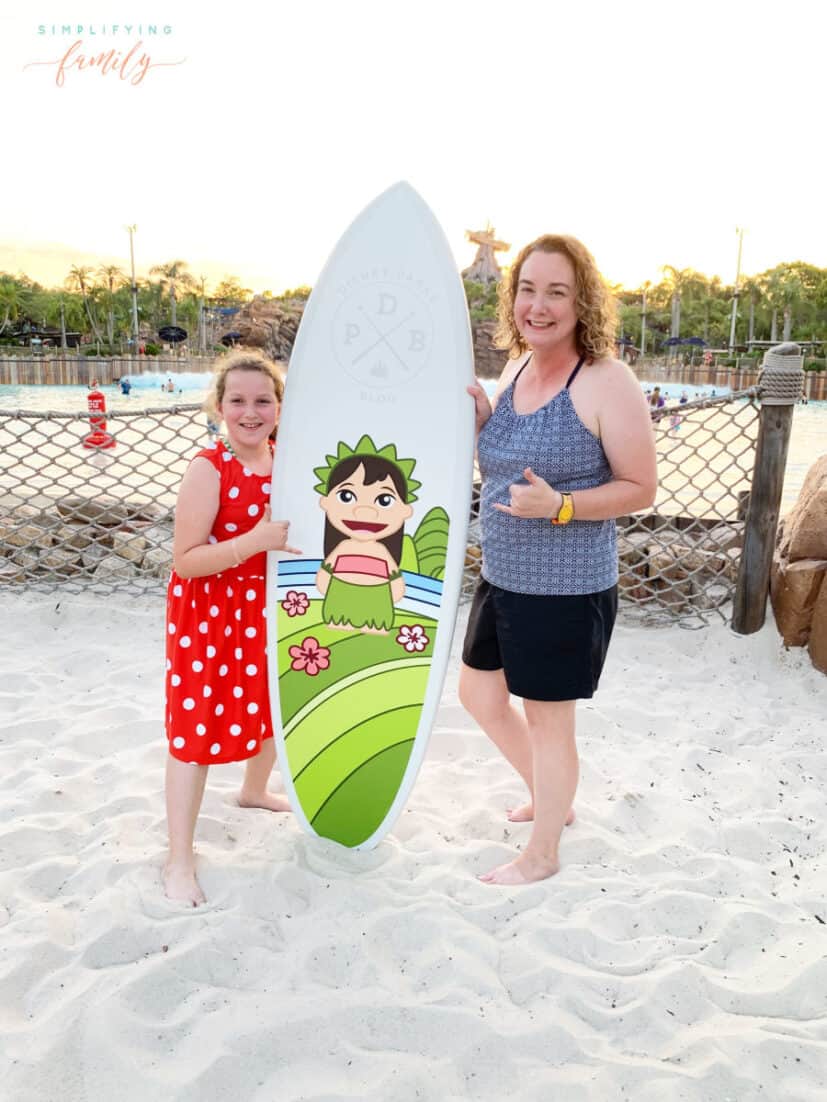 What Is H2O Glow Nights at Typhoon Lagoon?

Not sure what I’m talking about?

H2O Glow Nights is an exciting glow party that has returned to Typhoon Lagoon, this time it’s bringing with it even more flashy, splashy, glow-in-the-dark fun! 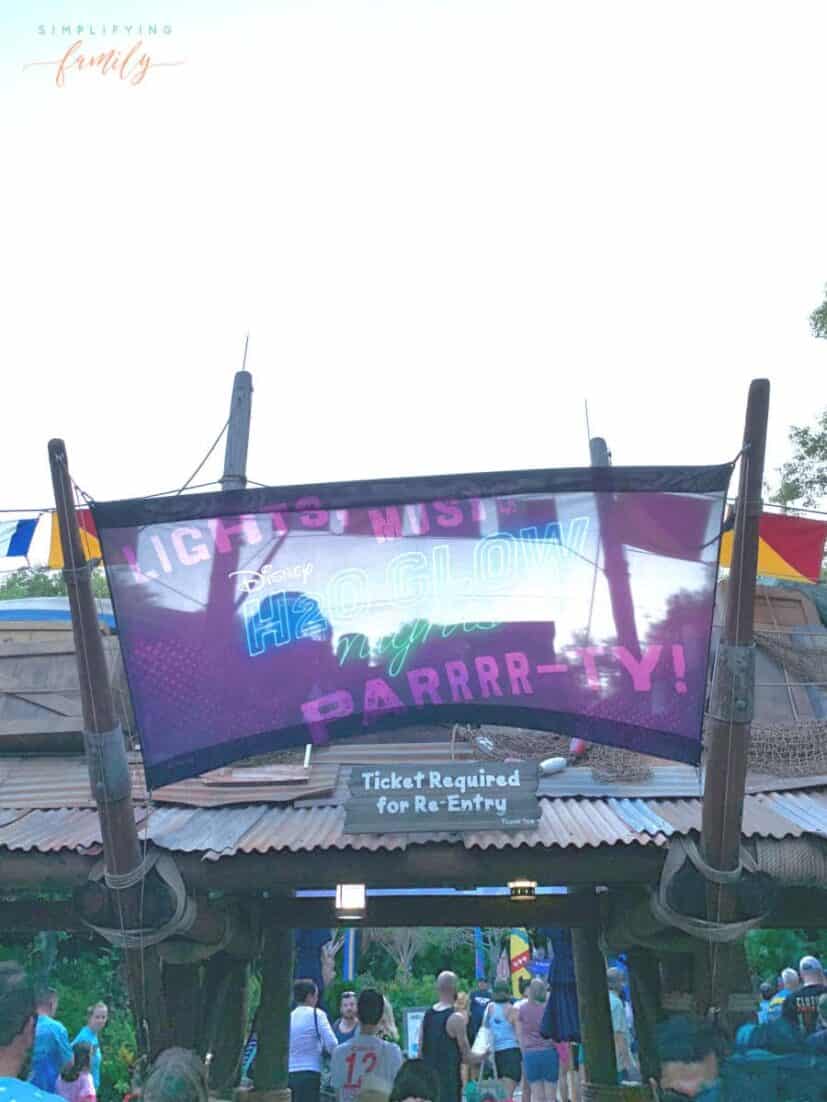 You can even enjoy character greetings with favorite Toy Story friends!

Is It Worth It?

If you are a Disney Vacation Club Member or Annual Pass Holder, the price for adults is $54 and $49 for children ages 3-9. 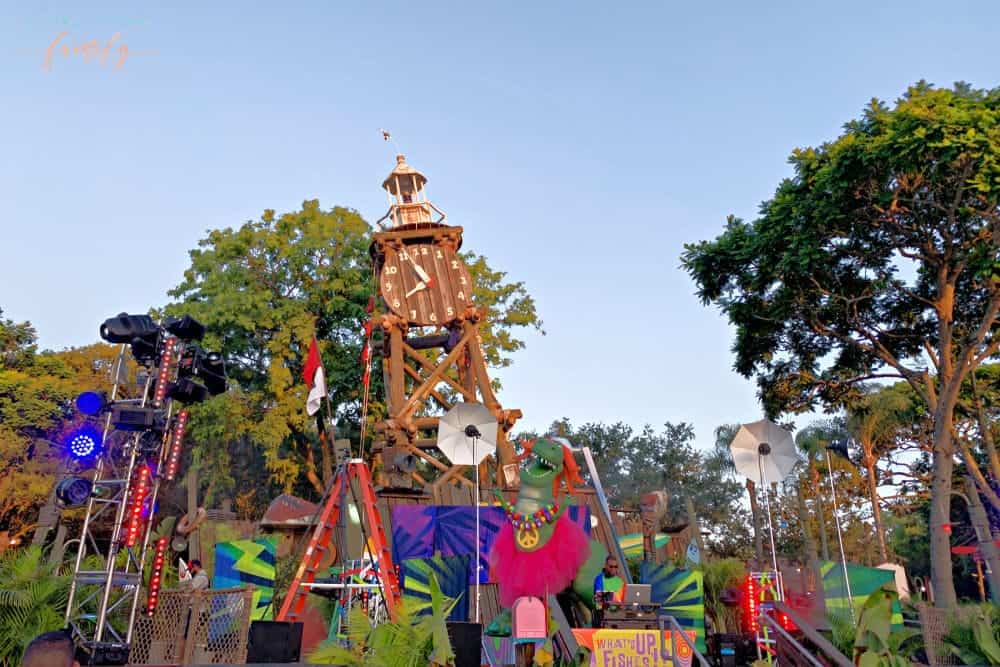 Would I bring the whole family?

That’s tricky. There are six of us, so each ticket adds up quickly.

While I would not bring our whole family to this special ticketed event, I would use it as a fun kid night.

It’s so important to spend one on one time with our children and this is a great event to attend.

Multiple times while we were there, my daughter said that it was our best Mommy-Daughter night to date.

What are the Dates for H2O Glow Nights?

What Time Does the Event Start?

Which Characters are at H2O Glow Night? 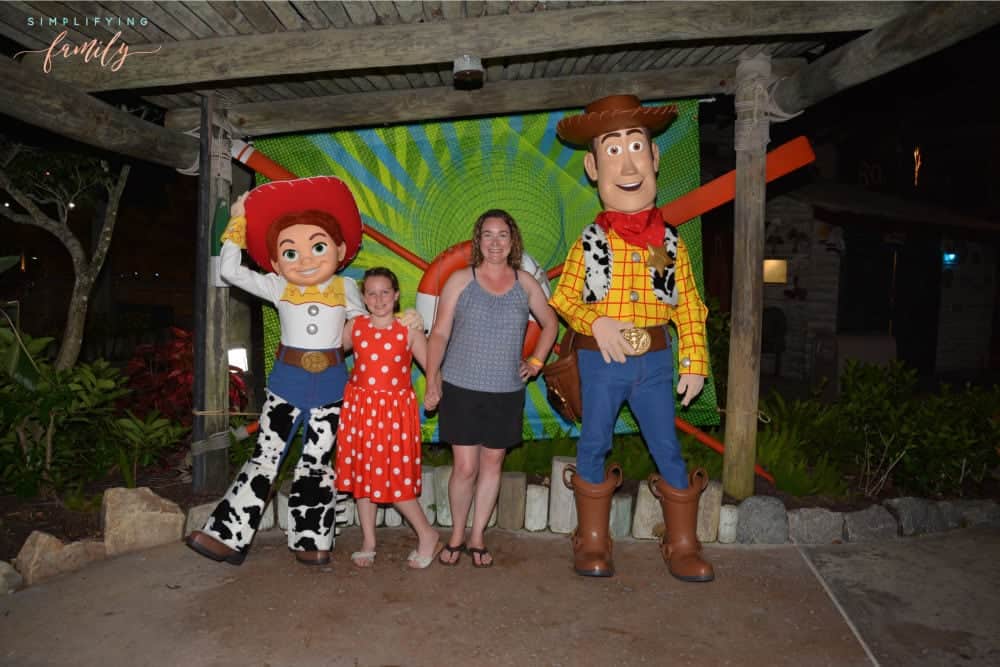 Is There Food Available at the Event?

We grabbed a quick bite at Leaning Palms, eating the chicken rice bowl with the Buzz Blaster (that comes with a light-up Buzz!), and kid’s chicken nuggets with fries. 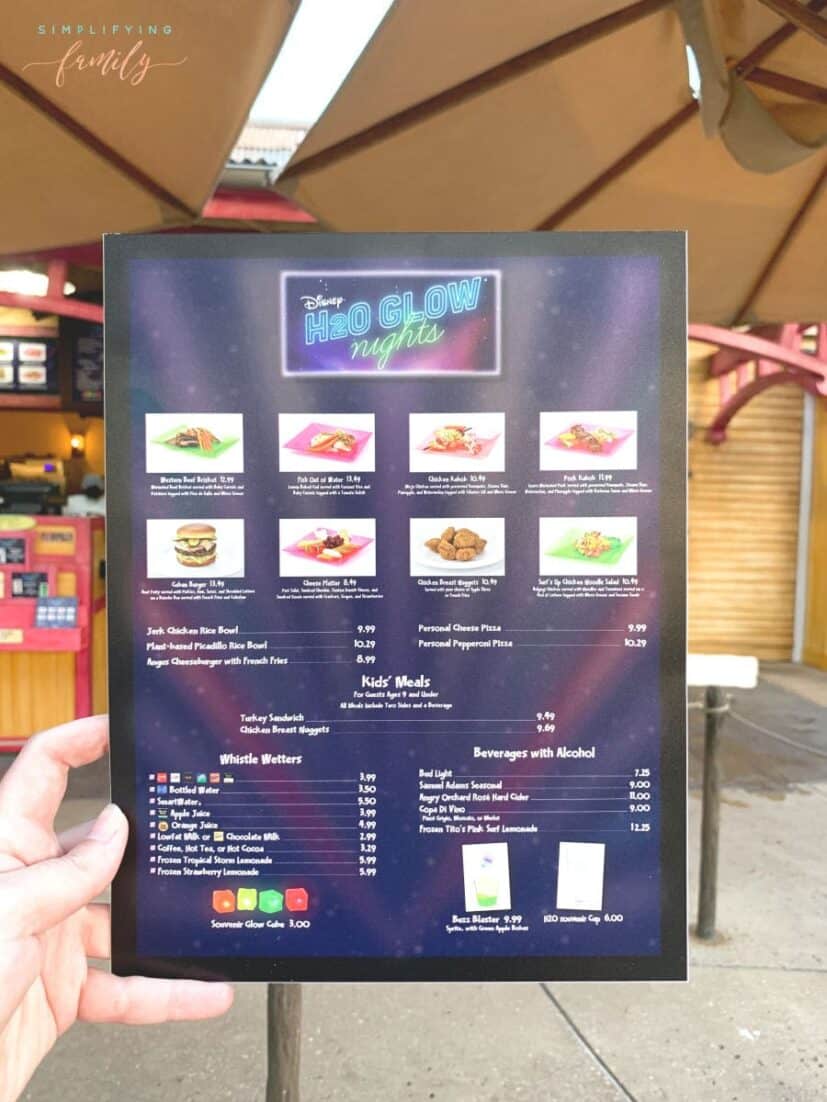 There are several different options though including yummy desserts like the Bathtub Party Sundae (available at Happy Landings) which includes vanilla ice cream, confetti cake, whipped cream, and chocolate rubber ducks topped with sprinkles and served in a novelty bathtub dish. YUM!!

6 Things You Want to Bring to H2O Glow Nights

I saw so many people walking around with these at the event. It was such a smart idea! I didn’t want to carry around my phone and get it wet, but that also meant I missed out on great pictures of my oldest in the lazy river. These pouches are great for phones and also for holding food and souvenir money.

You can rent towels, but they looked like they were on the small side. I was glad we pack one beach towel, but we really needed one for both of us.

I saw someone carrying their water bottle into the water park and I thought that was so smart! Yes, the event is at night, but it’s Florida. Chances are really good you are attending the event dehydrated. Please drink water. 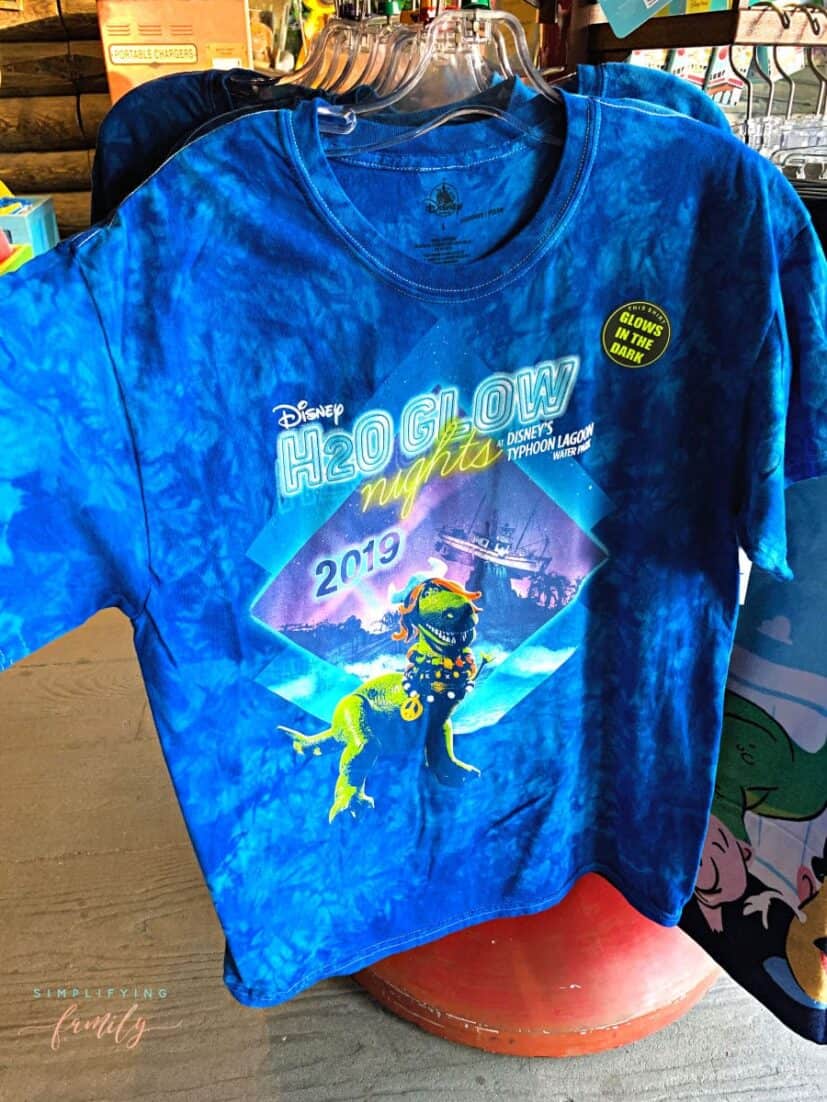 They have showers! There is soap available. I’m not sure what kind it is. If you’re picky and/or need conditioner too, bring your own.

Oh, how I wish I had those aqua socks! The bottom of the lazy river shredded my feet. Yes, the lazy river is for floating, but I was trying to stay with my child and the current didn’t always want that.

If you’re planning on attending one of the events or making your pro and con list, here are some things you should know before you go. 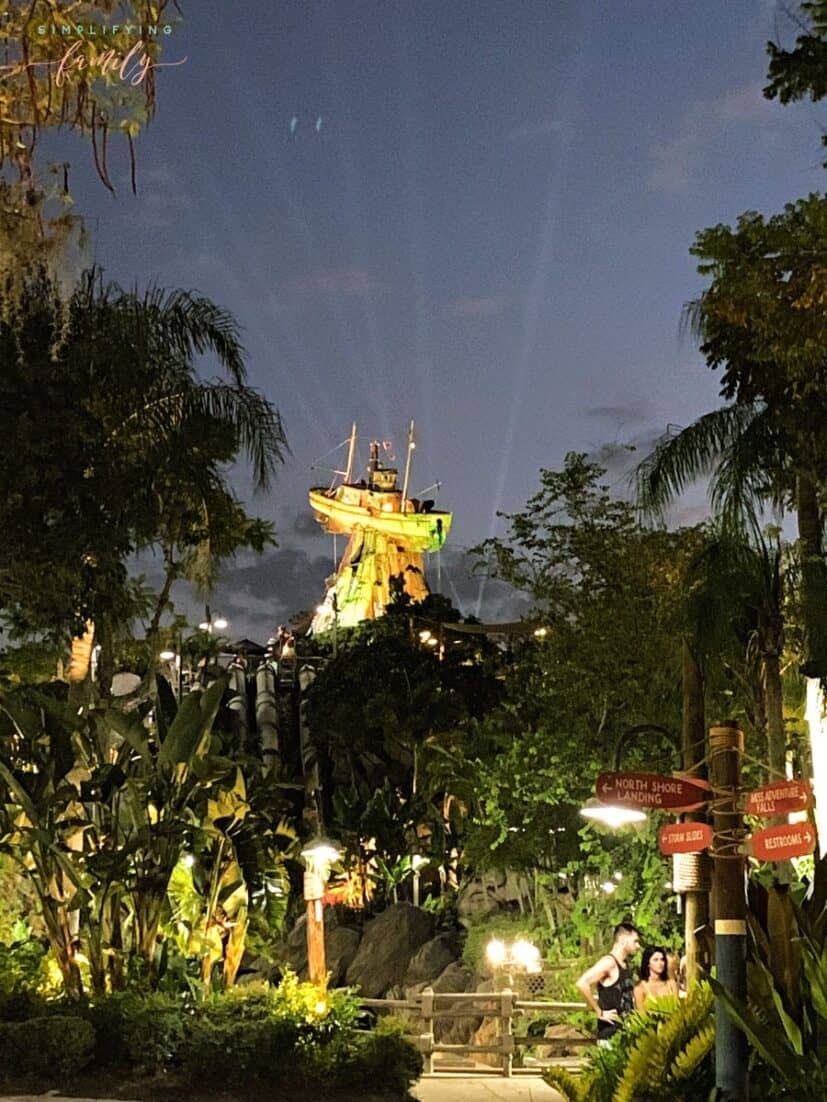 One of the things I was most concerned about was how lit the water park would be. Water and darkness, even with glowing things, doesn’t sound safe. It’s the mom in me.

I was pleasantly surprised that while there were dark walkways, all the areas with water that I went with my daughter were well lit. She wasn’t keen on water slides so we mainly stayed in the lazy river and wave pool.

The lazy river had super fun inflatables like flamingos and peacocks that aren’t normally in the water during regular operating hours.

There are souvenir shirts and Tervis tumblers on sale during the event!

Looking for characters? Photopass Photographers were with Woody and Jesse in a well-lit area. It was dark near Luxo Ball and Forky so grab a friend and go see them first when the sun is still up. There was no photographer, hence why you need a friend. We never could find Buzz Lightyear.

On Instagram, I was asked if this event was suitable for an 8-month-old. Yes! The awesome thing about Typhoon Lagoon is that there is an area for tinies called Ketchakiddee Creek. It made me wish we had brought the kids when they were smaller.

Grab a locker. Small lockers that hold one small backpack are $10 and large lockers are $15. 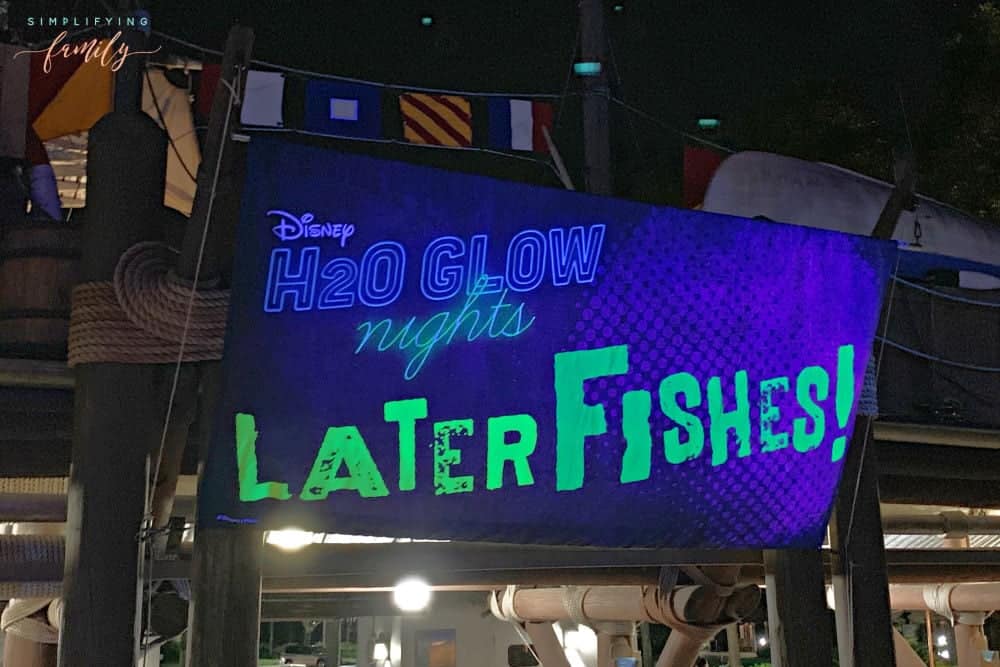 I hope you’ve found this super helpful! Let me know if you have any other questions!