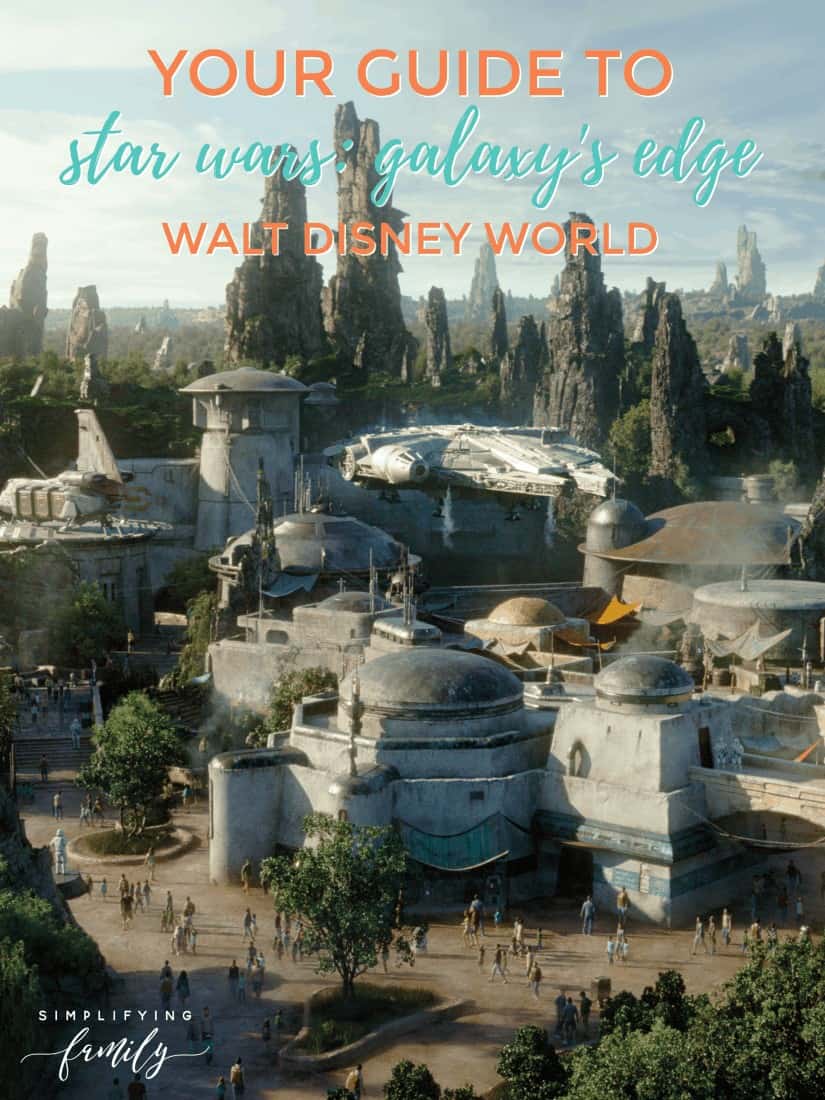 Visiting Galaxy’s Edge in Florida? Here is your guide to all things Star Wars: Galaxy’s Edge at Walt Disney World – including shopping, food, and rides.

How excited are you about the new Star Wars Land opening in Disney World this year? There is going to be so much to explore, and I have the inside scoop from my friends at Get Away Today.

Today I’m sharing all the details regarding rides, food, attractions and more so you can prepare for your journey.

It’s actually on the planet Batuu *wink* which is situated on the edge of the galaxy between Unknown Regions and Wild Space. Luckily, you can access Batuu with valid Walt Disney World theme park admission!

Galaxy’s Edge is the largest village settlement on Batuu, and it offers places for travelers to conduct business in relative anonymity, grab a bite to eat, stock up on supplies and more.

Here’s what you can expect as a visitor on Batuu.

As a visitor on Batuu, you’ll find the Play Disney Parks app a useful tool. Downloading this free app will grant access to language translation services, games and other insights into this strange new land.

The Play Disney Parks app will turn your mobile device into a datapad that you can use to interact with a variety of elements in Star Wars: Galaxy’s Edge, such as droids, ships, media screens, door panels, and antenna arrays.

Black Spire Outpost is a trading hub in Star Wars Galaxy’s Edge Disney World, and it features a number of vendor stalls with anything you could possibly need during your stay.

For those who support the Resistance, Savi’s Workshop provides a place for building a personalized lightsaber. It will be an intimate experience reserved for up to 14 guests at a time and will make for a stellar souvenir.

If you’re looking for a sidekick to accompany you through Galaxy’s Edge Disney World, you can make own in the Droid Depot. Choose from BB-and-R-series droids and get building!

You will pick pieces and parts off a conveyor belt to build one of two core models (R-series or BB-series) and customize your droid with various parts and colors. These droids will be capable of interacting with elements in the land!

Additional programming chips and accessories can be added to further customize these new friends. In addition, the Droid Depot will offer pre-built droids, droid-inspired products and more.

This is the outpost for unique gifts that have been collected from galaxies far and wide by Dok-Ondar himself.

This is your stop in Black Spire if you’re looking for a furry friend to adopt. The creatures here will be a collection from far and wide but will be harmless as they’ll be plush.

For trinkets, toys and more items that are authentic to the Star Wars franchise, you can visit the Toydarian (the flying alien species first seen in “Star Wars: Episode I – The Phantom Menace”) outpost in Galaxy’s Edge. You might even catch a glimpse of the toymaker herself.

You can demonstrate where your loyalties lie with the gear and accessories purchased within Batuu.

Resistance Supply is a “makeshift” supply location at the Resistance’s hidden command area. The stall sells Resistance pins, badges, hats, and other accessories to help guests feel like part of the cause.

From apparel to unique gifts, you’ll find it in Black Spire Outpost.

In keeping with the immersive experience on Batuu, all the food in Star Wars: Galaxy’s Edge Disney World will be like nothing you’ve seen before.

Think of this as an intergalactic food truck experience.

This is a family-friendly spot to grab a bite or a drink. Alcoholic and non-alcoholic beverages will be available here, including Blue and Green milk and Bloody Rancor (a twist on a Bloody Mary).

Snacks in the Cantina will include seaweed Senbei crackers, wasabi peas, lotus root, and prawn chips.

Here at Ronto Roasters, you’ll have a choice of sweet teriyaki or spicy herb turkey jerky.

Also on the menu is hot dogs with Szechuan peppercorn sauce and cayenne infused blueberry cornbread.

When it comes to collectibles, you may want to get your hands on a BB-8 and a Chewbacca Sipper, or the huge TIE Fighter Popcorn Bucket to hold the unique blend of kettle corn that will be offered exclusively in Galaxy’s Edge.

At Star Wars: Galaxy’s Edge Disney World, you can also attend a special, extra-ticketed event to celebrate food from a galaxy far, far away.

The Galactic Spectacular Dessert Party is sure to be an out-of-this-world experience!

Dine with heroes and villains from the Star Wars franchise at this themed dining event in Walt Disney World. Hosted in Star Wars Launch Bay, you’ll be surrounded by Star Wars props, exhibits, games and more.

Alcoholic beverages will be available for guests 21 and older, and you can savor the flavors of the Lightspeed Margarita, beers and wines. Non-alcoholic drinks will also be available.

After enjoying the meal, you’ll then be able to attend a viewing of Disney Movie Magic and Star Wars: A Galactic Spectacular. The event will send guests home with a souvenir as well.

Galactic Spectacular Dessert Party is priced at $79 per person and is in addition to Disney’s Hollywood Studios admission. Guests will check in at the Star Wars Launch Bay located in the Animation Courtyard near Disney Junior Dance Party.

During Galaxy’s Edge’s initial opening on August 29, one attraction will be up and running.

Millennium Falcon: Smuggler’s Run will take guests into the cockpit of “the fastest hunk of junk in the galaxy.” They will take the controls of the Falcon in one of three unique and critical roles as the ship hurtles through space. Some will be pilots, some gunners, and some flight engineers, creating multiple ways for guests to experience the attraction. From what I’ve heard from my friends at Disneyland, there are no bad seats.

Set to open later this year, Star Wars: Rise of the Resistance places guests right in the middle of the Rebellion and gives them an active role in the fight against the First Order, including a faceoff with Kylo Ren. Their journey takes them inside a full-size starship and aboard a nearby Star Destroyer.

Star Wars: Galaxy’s Edge at Walt Disney World | Book with Get Away Today

Did you know Get Away Today doesn’t just sell Disneyland tickets?

While that is what most people know them for, they also sell vacation packages to Walt Disney World and beyond. Get Away Today not only offers discount Disney World tickets, but they also partner with hotels to help you get the best rate on your rooms too.

You can view all the Get Away Today Walt Disney World packages online, or by calling 855-GET-AWAY and speaking directly to an agent.

They’re happy to answer any questions you have about Star Wars: Galaxy’s Edge Disney World, and help you plan your Orlando vacation.