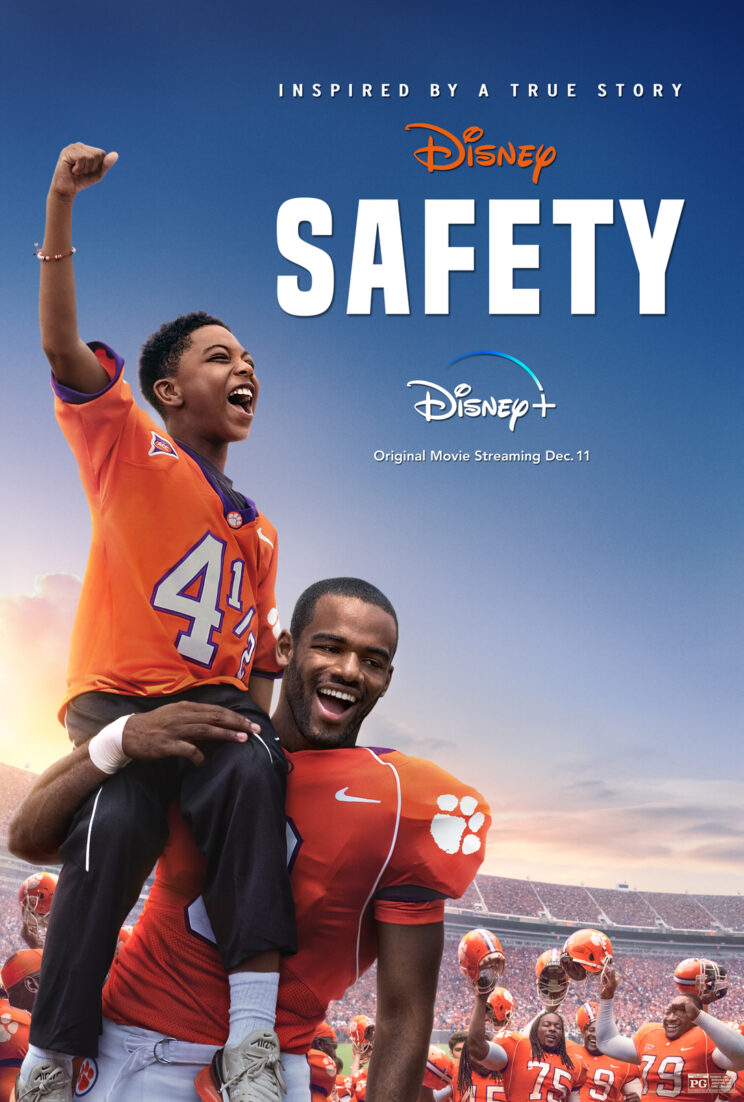 Safety on Disney+ is the newest Disney+ Original made for television movie, but is Safety family-friendly? Here is my honest review of what you will find.

We know that it takes a village to raise our children, but what happens when a university and community come together? Safety on Disney+ tells the story of a student-athlete who must choose between caring for his younger brother or his future.

Who Is Ray McElrathbey?

Set in the early 2000s, Safety is an inspiring story of Ray McElrathbey, a young man facing a series of challenging circumstances.

His faith and persistence help him to triumph over repeated adversities while playing football on scholarship at Clemson University.

While that would be hard for anyone, Ray-Ray does this all while struggling to raise and care for his 11-year-old brother Fahmarr while their mother, Tonya McElrathbey, is in rehab for a drug addiction.

Is Safety on Disney+ Family-Friendly?

For a sports movie, I would consider Safety is family-friendly. But it should be noted that the rating is PG.

There are some scenes that add to the story but might not be suitable for young children.

At the beginning of the movie, Ray gets phone calls and text messages from Fahmarr asking him to sign disciplinary notices from school.

When Ray questions why their mom can’t sign the forms, Fahmarr reveals that she was arrested for drug possession. He quickly packs a bag and grabs the next bus home to find his brother at the home of a drug dealer.

The next few scenes include a child being told they are going into the foster care system because of the mother’s drug possession and the distraught mother screaming that she’s sorry.

While a small scene that could be easily passed over, it could also be triggering for children who have been in similar situations.

There is a college party with colored drinks, loud music, and dancing, but nothing that seemed inappropriate. Much like the party scenes in Monsters University.

There is lying in the movie as Ray tries to hide the fact that his brother is living on campus, which also leads to comedy breaks during the drama. While this won’t bother some families, it will others, and should be noted.

Who Should Watch Safety on Disney+?

Whether you are a sports fan or not, Safety is a made for television movie that will pull at your heartstrings and will require tissues.

As the director, Reginald Hudlin said, “This is a powerful script that touches everyone who reads it, and now we are assembling a cast of wonderful young actors who will bring Ray McElrathbey’s amazing true story to life on the screen.”

Growing up in Kentucky, football was definitely a part of our lives, whether I understood what was happening or not. Friday nights were spent at the local high school and the weekends in the fall were spent with SEC Football on in the background.

That said, I don’t normally gravitate towards sports movies. I’m glad I watched Safety though.

Safety is more than another sports movie that was 15 years in the making.

Safety reminds us that there is good in the world. When we are open and honest about needs in our lives, people want to help and don’t consider us charity cases.

Family and sacrifice are the overarching themes of the movie Safety.

While I enjoyed Safety along with my 10 and 11-year-olds, my 8-year-old was more hesitant saying that there were parts of the movie that made him feel uncomfortable. The six-year-old was not interested.

Make sure to stay tuned to the final credits to watch the film closes with video of the Oprah Winfrey segment devoted to their story. The ultimate stamp of a feel-good true story.

Do you think you’ll watch Safety on Disney+ this weekend?

Don’t forget to check out the soundtrack for Safety! Oh the memories of college in the 2000’s.

Review of Godmothered on Disney+