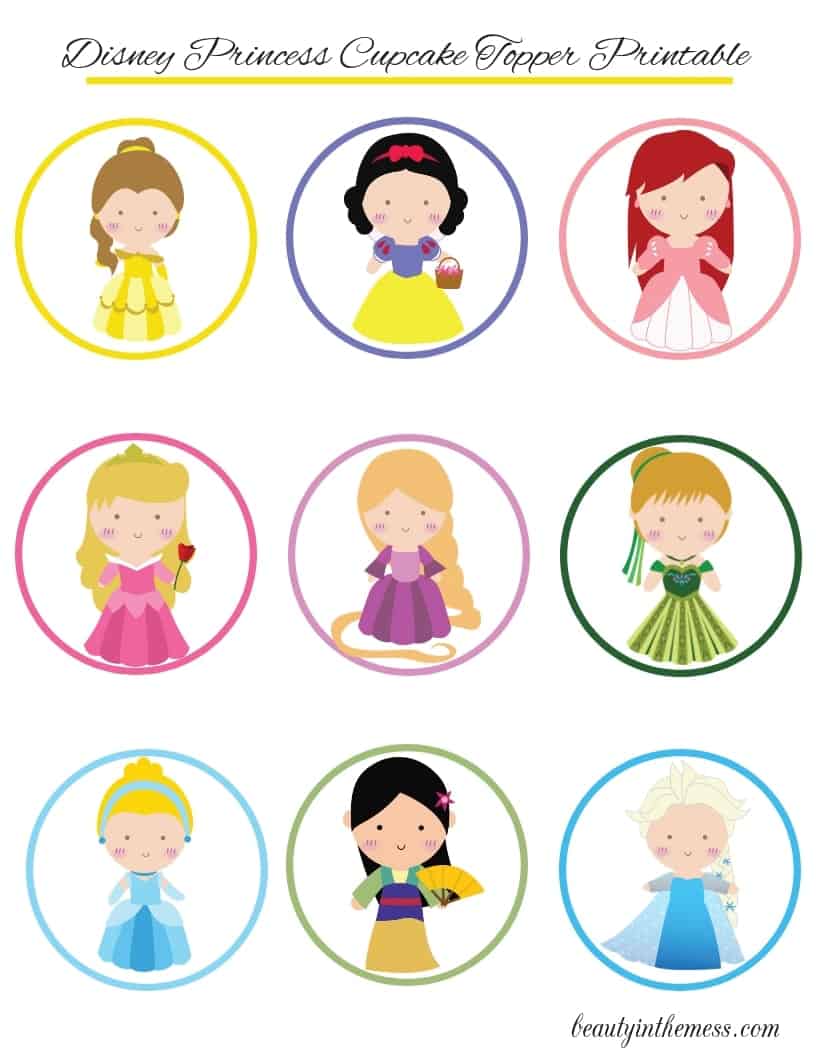 Need cupcake toppers for a Princess Party or Tea? Here is a printable for Disney princess cupcake toppers, featuring nine princesses in an adorable style.

Below, I have a printable for adorable little Disney Princess cupcake toppers for your themed party, or just for fun. The printable features nine princesses in an adorable style. Each is featured in the same basic frame but is easily distinguishable from the rest. These toppers are perfect for any party.

Belle in her yellow ballroom gown

Snow White in her traditional blue and yellow dress

Ariel in human form, wearing the pink dress she wears to dinner in Prince Eric’s palace

Rapunzel in her traditional purple dress and long hair

Princess Anna in her green dress she wore to the coronation

Mulan in her yellow non-princess dress

The sweet doll-like dispositions and rosy cheeks set the style of these iconic characters apart from other artistic representations. Print out these cute toppers and add some Disney magic to your cupcakes. Use them as an added detail to a Disney princess themed party, or just for fun.

Simply print out as many sheets of the Disney Princess cupcake toppers as you like. There are 9 princesses to 1 sheet. It’s best to print double the number of cupcakes so you can make the toppers two-sided. Cut out the circles and use them to cut out shapes in the construction paper. Trace the shapes before you cut. You can either duplicate the circle or get creative by using hearts, diamonds or other shapes. Just be sure the bottom does not extend so far that it interferes with the cupcake (stars are not recommended).

Glue the Princess image to your construction paper cutouts. Then glue the back side of two pieces (a front and a back) and sandwich a toothpick between them. Leave enough protrusion in the bottom for the toothpick to penetrate the surface of the cupcake.

Voila! So simple yet so cute. Perfect for your Disney Princess.