The transition to motherhood was not an easy one for me, for a lot of reasons, but mainly because I had my kids really fast. We are that family who had three kids in less than three years. Before having kids, I had heard of this “three under three” phenomenon and was certain that I would not allow it to happen to me.

This was just one of the many times I imagine God laughing at my “plans” for my life.

By his life-giving, glorious grace, we had our daughter in Oct 2011, our first son in May 2013 and our second son in July 2014. I spent the better part of four years in full panel maternity jeans. To be sure, it was the best of times… it was the worst of times.

People often say to me, “I don’t know how you do it.” And I typically respond, “me either!” But lately, the Lord has prompted me to tell the truth about how I am not just surviving but thriving in the little years. And the truth is this: I am thriving by spending time with God in His Word. 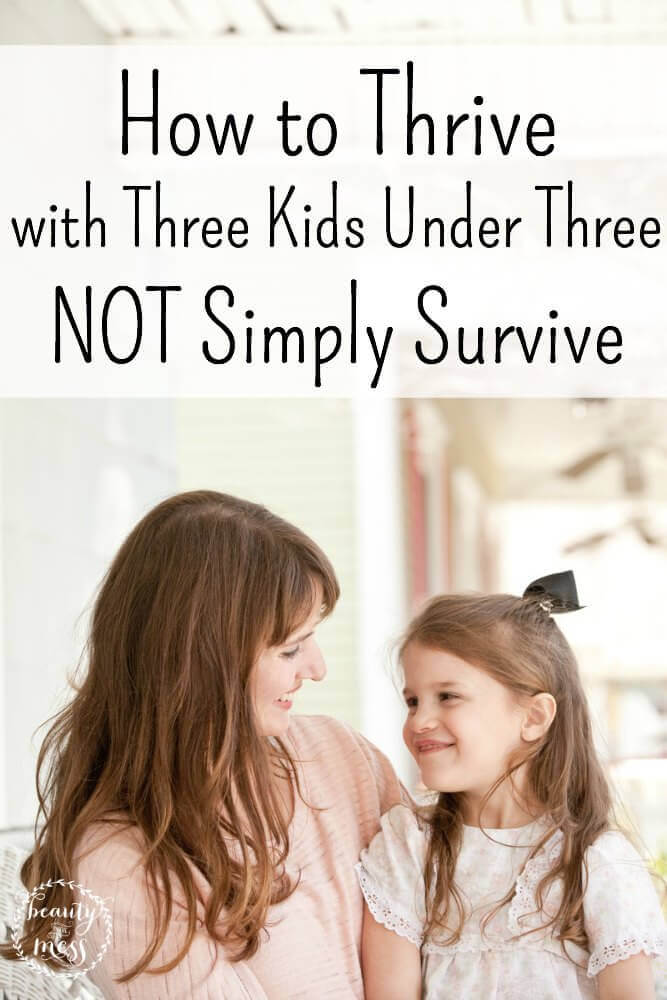 How to Survive with Three Kids Under Three

But don’t think for a moment that this was always the case. It took me a while to “get this” and prioritize my time in the Word. It wasn’t easy but I asked God to show me how to incorporate time with Him in His Word and He helped me reorder my thinking to accomplish it.

One of the biggest challenges of the transition for me was that desperate feeling that my time was no longer my own and the fear that it may never be again. Having a baby demands so much of a new momma. There is so much to do and learn; even more, things to adjust to and let go of in order to simply survive. And in the midst of having my three children in less than three years, I found myself feeling very overwhelmed and very disconnected — especially from God.

After nearly a year of floundering trying to survive with three kids under three, the Lord began to draw me back to His word. He showed me new ways to spend time reading the scriptures when “quiet time” was a rarity in our house. 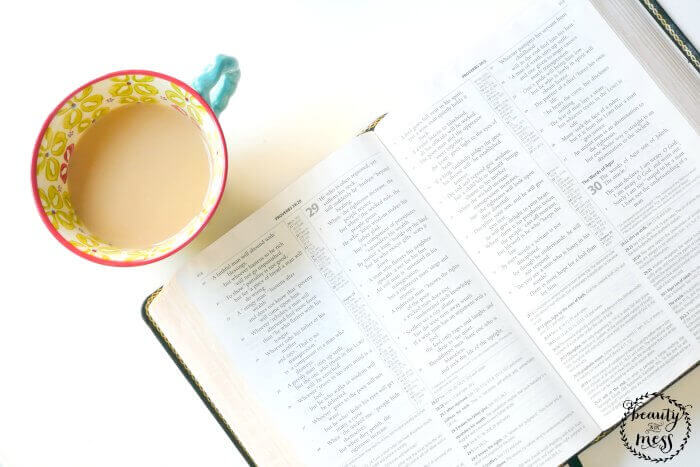 First, He AFFIRMED the value of being in His Word

Psalm 63 had long been a favorite of mine, but it wasn’t until I became a mother that the words of that Psalm came to life for me in a deeply real and personal way, “O God, you are my God; earnestly I seek you; my soul thirsts for you; my flesh faints for you, as in a dry and weary land where there is no water.”

There is nothing more weary, dry and faint than a parent whose baby won’t go to sleep!

As I continue in the Psalm, I learn that NOTHING will soothe my faint, dry and weary self but God. I have to believe that looking upon him in the sanctuary, beholding his power and glory will bring relief. To believe that his steadfast love is better than life and bring him praise. Blessing Him as long as I live and lift up my hands in his name. Why? Because this will satisfy my soul as with FAT and RICH FOOD! (vs. 5) Um, hello! For a foodie like me, this verse takes on a whole new element. Furthermore, as one who is now intimately familiar with “the watches of the night”, there have been no sweeter times than these for meditating on God’s Word and inviting him in to meet me there.

While this is all true, it is also true that there will always be busy seasons of life and there are times when we simply can’t spend hours on end in His Word. So these two truths remain: I cannot survive with three kids under three, or any, season without the Word of God; and I do not have time to invest hours in Bible study.

Next, He helped me change my APPROACH to time in His Word

Before having kids, I relished my quiet times. Journal in one hand and latte in the other, I would enjoy long and leisurely times studying the Word and recording my thoughts and prayers. Just before my daughter was born, I started one of those in-depth 8-week style Bible studies. However, once we were home from the hospital and somewhat settled in, I realized that my days of lingering with God over coffee were gone for now.

But instead of adapting and asking God to show me a better way to connect to Him in His Word, I found myself avoiding time in His Word altogether. I was tired and weary and my brain was fried. Not having the wherewithal to do Bible study “homework” or to even rethink what time with God could look like in this new and challenging season.

I fully understand that there are seasons of life when our time is not our own. What I have come to realize is that, during these times of unusual busyness, I need to focus on a few verses to sustain me rather than attempt to engage in an in-depth Bible study.

Life with Three Kids Under Three: Connect to The Vine

Not long ago, a close friend and mother to three boys encouraged me with the following advice: Put the in-depth studies to the side for now. Pick a few verses that are meaningful to you to meditate on those verses whenever you get a moment. Write them on sticky notes, tape them to your mirror or on your fridge… places where you tarry as you wait for the next thing to happen… and let these verses sustain you throughout the day.

I took my friend’s wise advice and I began to see the value of connecting with God little-by-little all throughout the day rather than the “one and done” approach I had previously relied on for a daily time in His Word.

Instead of tackling a super involved study, I find myself now returning to some of the very same verses, time and again, and in the process, some wonderful things are happening: 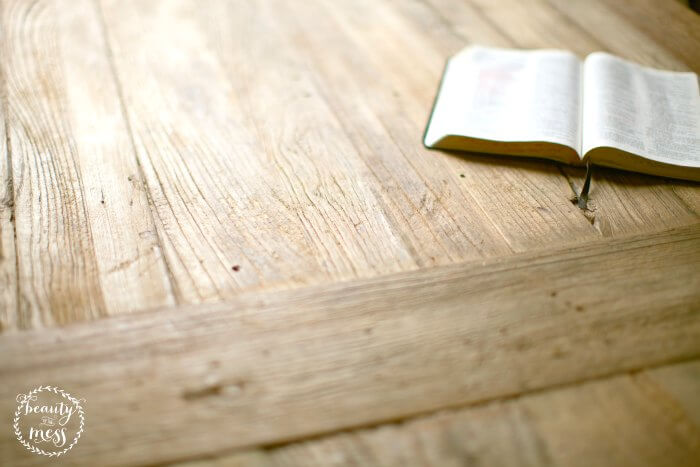 Finally, He gave me the ABILITY to spend time in His Word

How did I survive with three kids under three?

The two main ways God equipped and enabled me to connect to His Word were through good old fashioned notecards and through smartphone apps.

I chose a few verses and wrote them on notecards and paper. For some, I even used my kids’ markers and construction paper which still makes me laugh. These are now plastered all over my kitchen walls. This is a great place for scripture to literally be in my face because the kitchen is where I tend to lose my mind 😉

Next, I utilized some of the many amazing smartphone apps available to help us connect with God through His Word. There are Bible apps, audio Bible apps, devotional apps, scripture memory apps, sermon and podcast apps; but my favorite is listening to songs that are set to scripture (Seeds Family Worship is a great source for this, and free on Spotify!).

And be encouraged that as you pray and ask God to help you get into the Word, HE WILL DO IT! Philippians 2:13 says, “it is God who is working in you, enabling you both to desire and to work out His good purpose.”

Remember This to Survive with Three Kids Under Three

My point is this: we cannot expect to survive spiritually, mentally or emotionally, much less thrive if we are not pouring the Word of God into our hearts and minds. It is literally life and breath and we need it rooted in our lives if we are to thrive in any season of life. While there will be times when it’s more difficult to read His Word, it’s not an excuse to abandon his Word. If we neglect reading his Word we will become faint, dry and weary; not only that, we will miss out on the abundance of God’s promises found in his Word.

So in seasons of busyness, let’s resist any temptation to avoid spending time in God’s Word. Let’s pray and ask God to give us the desire and the ability to rethink our days to incorporate time in His Word. The time we spend focusing our minds’ attention and hearts’ affections on God’s Word is the best thing we can possibly do for our families, our friends, our coworkers, and ourselves. It is by the power of God’s Word at work in us that we are transformed and begin to thrive as we bear the good fruit of the Spirit of God. 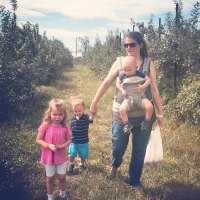 AnnieLaurie Walters is a pastor’s wife, mother to three, and blogger at annielauriewalters.com. After nearly 15 years working professionally in a variety of non-profit, private and public communications roles, she now serves as “a very unlikely stay-at-home mom” and enjoys cooking, connecting with friends and curating the perfect Spotify playlist.

I’ve just realized this more this week and i’m thankful for this post reaffirming what i’ve re discovered! thank you. this is the only advice a new mom needs! rely on her saviour and he will lift her up and make her burdens feel light. 💖

I found this to be a blessing today!

I was richly blessed by this, thank you for sharing it!

I found this blog post so encouraging! I just had my third baby and am now mother to a 4 year old, 20 month old, and 2 month old. My youngest baby ended up being an emergency c section which threw me off completely and immediately I knew by the grace of God she survived the labor and surgery. But after coming home, I found it so hard to study God’s Word the way I had before I had my third. So this has been very encouraging to me and helped me think more out of the box with how I can spend time with Him. Thanks so much!

What a wonderful word of encouragement! Thank you. I am a stay at home mom of two under 3 and this is a blessing. Thank you.