Join my newsletter list to be the first to hear our latest news! Learn More
Home | Simple Home | A Silent Struggle: My Infertility Journey

24shares
If you missed yesterdays post, you can read The Invisible Pain here. 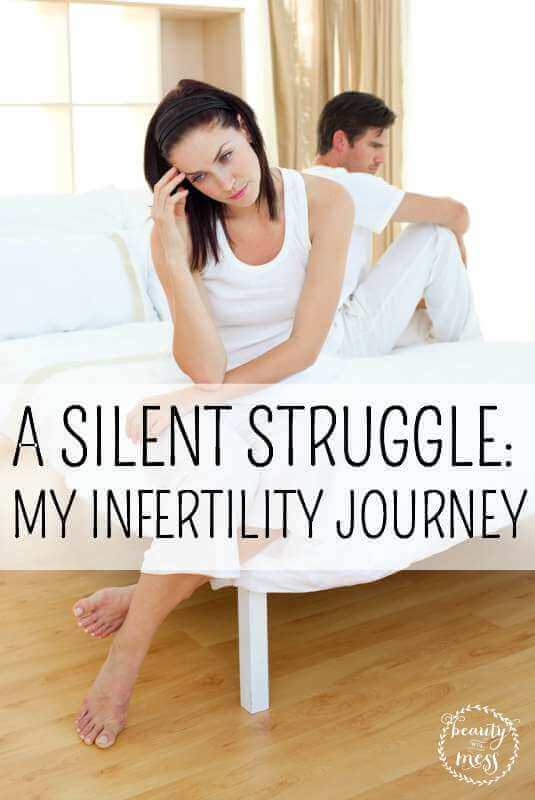 Today I’ll share with you our infertility journey. Maybe you’ve seen pictures I’ve posted on Beauty in the Mess on Facebook or you actually read my About Me page on this blog and you’ve seen my children. So what could I know about infertility?

Here is our story. I’ll start at the beginning.

I have always loved children. I graduated from college with a degree in Educational Ministries to be a Children’s Minister. But my dream job was to be a Mommy.

My now husband proposed to me on Good Friday, April 13th, and we were planning our wedding for October 13th. It was a whirlwind. As I was planning our wedding, one of ladies in our church approached me and asked me if I had gotten my birth control yet. It actually hadn’t crossed my mind. We believe that God created sex for marriage, so we were saving ourselves for that time. She recommended a gynecologist and I made an appointment. I left with a prescription for a birth control pill. While I can’t remember the name, I remember the feeling. I was uncomfortable about taking something that would alter my body chemistry and prevent something that I dreamed of. But no one told me it was okay to trust the Lord with my body and my future. We had to use some form of birth control. We were told that we needed time to get to know each other. That we needed at least 5 years of it just being us before even considering trying to get pregnant. And you know what? I believed them. Even with as uncomfortable as I was taking the pill everyday, I took it. Their words scared me into thinking that if by chance I did get pregnant before 5 years, we wouldn’t be able to survive. What in the world?!? What lies! I was putting all of my trust and faith in a little pill and the words of people.

In January of 2003 we moved to Wake Forest, NC to attend Southeastern Baptist Theological Seminary. Guess what? My first semester I took Ethics. One of the topics we covered? Birth control. Do you know what my Ethics professor told me? Birth control can cause spontaneous abortions. The only thing about the Pill that made me feel semi-comfortable was that people did get pregnant on the Pill, so it wouldn’t hurt the baby. Right? Wrong. Here is what The Physician’s Desk Reference says:

Combination oral contraceptives act by suppression of gonadotropins. Although the primary mechanism of this action is inhibition of ovulation, other alterations include changes in the cervical mucus, which increase the difficulty of sperm entry into the uterus, and changes in the endometrium which reduce the likelihood of implantation.

“Implantation” implies that the egg has already been fertilized. Life begins at conception. By “reduc[ing] the likelihood of implantation”, I was aborting my baby. That hit me hard. I had no idea. I couldn’t wrap my brain around this new found knowledge. I threw out the Pills and vowed never to take them again. How could I? But then I went for my yearly exam and the doctor told me how stupid I was. How could two graduate students really expect to survive if we got pregnant? And guess what. I believed her. For a bit. I did fill that prescription. And I took some of those pills. And I cried. I thought about the “what ifs”. What if I did get pregnant while we were both still students? I imagined myself bringing my baby to class. Sitting in the back row so if they cried I was close to the door. It wouldn’t be so bad. We could do it. God would provide. Finally. Some sense!
I stopped taking the Pill that day and never looked back. We used condoms occasionally. But we were finally trusting that God would take care of us. He would create the baby in His image, knitting them together in my womb, in His time.
I’m not sure when we thought it would happen. Maybe not immediately, but soon. So we waited. And waited. And waited. I don’t know about you, but sometimes I can be really impatient. All around me friends and strangers were getting pregnant. Some on purpose. Some on accident. And there I was, just waiting on the Lord to make fruitful my womb. To bless us. To answer my prayers and longings. And yet, He was silent.But you see? He sees the bigger picture. It’s not about my plan, my wants, my desires. It’s about His plan, His purpose, for His glory. It’s not all about me. Does it hurt? Yes! Are there tears? Of course! But there’s purpose. His purpose. And I wasn’t alone. He was right there with me. He gave me the strength I needed to make it through tough situations. To be able to minister to those who needed ministering to. It wasn’t me. I wanted to run and hide when I saw a pregnant woman in the aisle at the store. Sometimes I wanted to punch the person who asked when we were going to start trying to have children. Obviously those were not right responses, but that’s how my flesh wanted to respond. I needed Jesus more than anything in those days (and these!).

Less than a week before Christmas of 2007, my husband was offered a job in Charlotte. He accepted and had to start on December 31st. This was a trying time as we sometimes saw each other on weekends. Sometimes. Our house sold in Wake Forest and we closed on our new house in March of 2008. Three months later, I was late. I had been late before and tried so hard not to get my hopes up. But it’s so hard. Two weeks later, I bought a pregnancy test and took it.

I didn’t even have to wait. It was the brightest + I’ve ever seen. Emotions rushed through my body. I didn’t know whether to jump up and down or sit on the floor and cry. I had always thought I would come up with a clever way to tell my husband if by chance this day ever came. Nope. All plans went out the window. I ran down the stairs and showed him the test. We were ecstatic!! And in shock. I couldn’t believe it. I probably looked pretty silly driving down the road as I was praising the Lord all the way to work. But how could I not? It was all Him. I had given up.

The previous month, I had a little heart to heart with God. I just dumped out all my frustrations, hurts, and explained how painful it all had been. Of course this wasn’t new news to Him. He knew. And He gently reminded me through His Word that He is faithful and He keeps His promises. He wouldn’t leave me or forsaken me. That regardless of what happened in the future, He had a special plan for my life. I just needed to trust Him. He also reminded me that although He is faithful to keep His promises, no where in Scripture does he promise He will bless every woman with a baby from their womb. There are other ways to have children. Adoption was always on the forefront of our minds. Being a mentor to young women/youth is also a way to become a spiritual mother.

But I still remember the pain. And each time we’ve wondered how long it would take to get pregnant. Have you ever heard of Secondary Infertility? It’s real.