Birth Story: He Is Faithful! 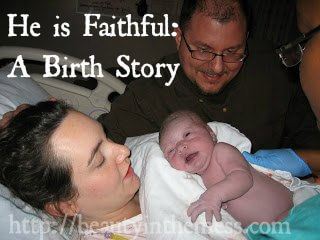 Her due date was February 23rd, so at our Tuesday appointment the NP stripped my membranes to get things moving. It worked, although I wouldn’t do that again. After having gone to bed at 1:30 Wednesday morning (we were doing last minute things trying to prepare for the baby’s arrival), I awoke at 3:30 with contractions. I drank some water and tried to go back to sleep, but to no avail.

At 5:00 I woke up my husband and said I was having contractions. He kept trying to get me to go back to sleep, but the contractions were getting closer and closer together. Not to mention getting more and more uncomfortable. He decided that maybe this really was happening so we called our Doula and the DR’s Office (I think around 6 am). Both agreed this really was happening so our Doula started her trek to the hospital, and Lindsay said she would let the hospital know we were on our way. My husband made sure we had everything we needed, put the pup in her crate, and off we went.

We arrived at the hospital at 8 am. I made sure that everyone had their copies of my birth plan, and they started prepping me to be monitored. Everything was going as planned. I was excited to find out that my favorite mid-wife was the one on call. After checking me, she said she thought that with the way things were progressing we would have a baby sometime between 3:30 and 5:30 that afternoon. I remember thinking that 3:30 seemed like forever away. Thankfully the clock was behind me so I couldn’t watch the minutes tick slowly by.

At some point (I think before the mid-wife came in), our doula arrived. My idea that it would be awesome to have another support person there proved to be correct. We really could not have gotten through it without her!! I guess it would have happened, but it would not have been pretty. I highly suggest having a Doula there during labor and delivery. It took a lot of stress off my husband, and allowed him to leave and get something to eat.

During the contractions, I rocked in the rocking chair, sat on the birthing ball (this was short lived), walked the halls a bit, and got in the shower (clothed). At 1:30 my midwife broke my bag of waters. Contractions definitely got stronger after she did this. The babies head was in my pelvis at station 0. At times I could feel her head pushing against cervix trying to get it to open more. This is where time becomes a blur to me. The contractions were so strong I couldn’t keep my eyes open. I was on my second Labor and Delivery Nurse at this point. The adrenaline that was keeping me going earlier that day had worn off, and the lack of sleep the night before was kicking in. I knew that if I could make it to 8 cm I could go natural (see birth plan). When the midwife checked me and I was still 7 cm, I knew that although I might be able to 10 cm without pain meds and rest, but I couldn’t do that and push this little one out. The decision was made. Through tears I told our doula and my husband that I couldn’t do this, that I was too tired, all I wanted to do was sleep, and I wanted an epidural. The tears were tears of tiredness and failure. I kept apologizing for not being able to give birth without meds. I just couldn’t do it this time (I’ll try again next time).

Pretty quickly after that I was given an epidural. The relief was amazing. I could still move my legs, wiggle my toes, open my eyes, carry on a conversation, and get some much needed rest. During all this, my in-laws arrived at the hospital. I felt kind of bad that they were just sitting in the waiting room, but they didn’t seem to mind :). Sleep was amazing! It allowed me to relax enough for everything to progress like it needed to. By this point I was on my third Labor and Delivery Nurse of the day. I had watched the sun rise and set. It all seemed surreal and dream-like. While I was having a baby, everyone else was going on with their everyday life. Well, everyone except those who knew I was having a baby. They wanted updates :).

When I awoke from my much needed nap, I met Kiki, our third Labor and Delivery Nurse. She was great! The baby would not cooperate and stay still long enough for Kiki to get a reading on the monitor. Kiki said that every time a baby did not cooperate like this one, it was a girl. Time would tell.

Apparently one of the reasons the monitor was having a hard time picking up the baby was because it was time to start pushing. According to my husband, we pushed through about 7 contractions and out she came. As I was pushing I remember thinking that I was thankful for the epidural. There is no way I could have pushed without that nap.

They announced that we had a GIRL! After that it gets blurry and it did not go as planned. They placed her on my chest and started cleaning her up. My husband cut the cord, and they took her away to the other room. There were several doctors and nurses who kept coming in and out. My husband went with her to the other room so he knows what went on. I knew something wasn’t right, but no one was telling me much. I think someone told me that she swallowed a lot of amniotic fluid into her lungs. They took her for chest x-rays and to do blood work. Before they took her to the NICU they let me see her for a brief second. Again, it was nice to have our doula there because I wasn’t alone when my husband was with our daughter and when he went to tell my in-laws that she was here.

What was supposed to be one of the greatest moments of my life left me numb. I didn’t know whether to cry or happy because she was finally here. After four years or waiting and wondering she was finally here! They told us it would be two hours before we could see her in the NICU, so we waited. We made phone calls, texted, and hung out with our family.

While they were moving me from the Labor and Delivery Room to my Postpartum Room, I almost passed out. We figured that was normal because of the physical and emotional rollercoaster my body had just been on. My pulse had been abnormally high, but the nurses didn’t seem concerned, so we thought it was normal. By the time we made it to the room it had been two hours and I wanted to see my baby girl. They put me in a wheelchair and off we went. We got to the NICU and I started feeling really weird. My ears felt like they had cotton in them and my vision got hazy. My husband says I passed out. That’s up for debate. Needless to say I didn’t get to see my baby girl that night. The NICU nurses called upstairs for a nurse to come get me and take me to my room. I insisted that my husband stay with Dad and Mom C so that someone could be with our daughter.

The next morning the NICU Doctor came in and told us that our daughter’s x-ray came back normal but that her CBC showed something so they were going to put her on 72 hours of antibiotics. My heart sank. Was my little girl going to be okay? I was thankful God had worked His hand so that we were in this specific hospital and that she was in good hands. I was sad that she couldn’t be with us. I was scared that she was still in the NICU. I was hormonal, sleep deprived, and on strong pain meds. All this led to a few tearful breakdowns. One of which occurred the first time I saw her and got to hold her. 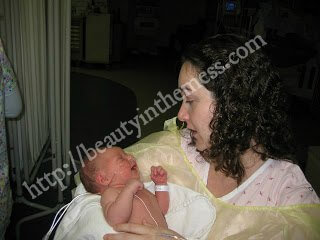 I still wasn’t feeling right. I thought it had to do with lack of sleep. The night nurse I had two nights in a row suggested that I have my doctor run a CBC on me. So that is what I did on Friday. We assumed everything was normal because the nurse came by and we signed the discharge papers. At 6 pm though one of the doctors from my practice came in to say that I was not being discharged but I was going to receive two pints of blood. Getting a blood transfusion was NOT in my birth plan. Expect the unexpected. 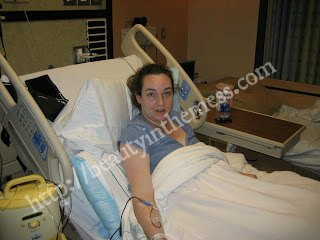 I was amazing the difference receiving the blood made. I was exhausted because they had to check my blood pressure and temperature every hour, but it was worth it. Yet again, God proved His faithfulness. His hand was over this over experience. The whole pregnancy really. At 13 weeks we were in a wreck that totaled my car. I am still in awe of His goodness and grace through all this. What a great story to tell her when she’s older. 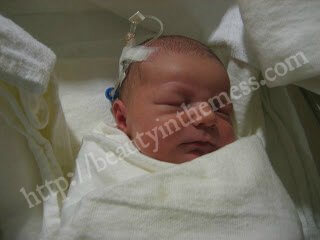 I have never been more thankful for family than during this time. I can’t imagine what it would have been like had we been without family and friends. Thank goodness for cell phones and text messaging! I knew friends were only a phone call or text away. 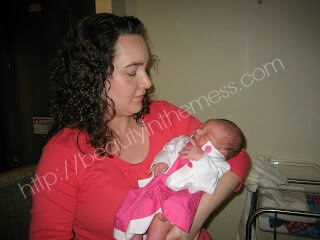 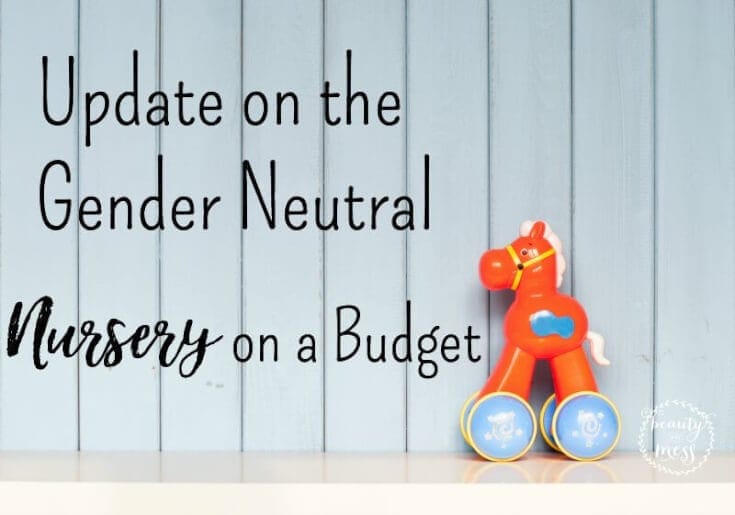 Previous
Update on the Nursery
Next
Desperate? Need to Breathe?
Click here to cancel reply.

Enjoyed reading : ) So happy that God continues to bless your family with a "quiver full of arrows".

Thanks for stopping by, Ashley! Most days are chaotic, but full of blessing.

Wow! What a story! Thanks for sharing at Beauty Through Imperfection.

It amazes me how with each pregnancy things are different. we are pregnant with number 7 this time.

Congratulations! I get looks and comments all the time with our three. We've always talked about 5, but that's all up to the Lord. I agree. Each pregnancy and birth were completely different. Speaking of birth, I don't think I ever posted the birth story of our third from last April. Now that was crazy! Thanks for stopping by!!

Beautiful baby! I know this post is a few years old, but I don't think there is a time limit on saying, "CONGRATULATIONS!!!!" :-)

Thank you! She made quite an entrance into the world, and each day is an adventure. She's an amazing little girl! Thanks for stopping by!!